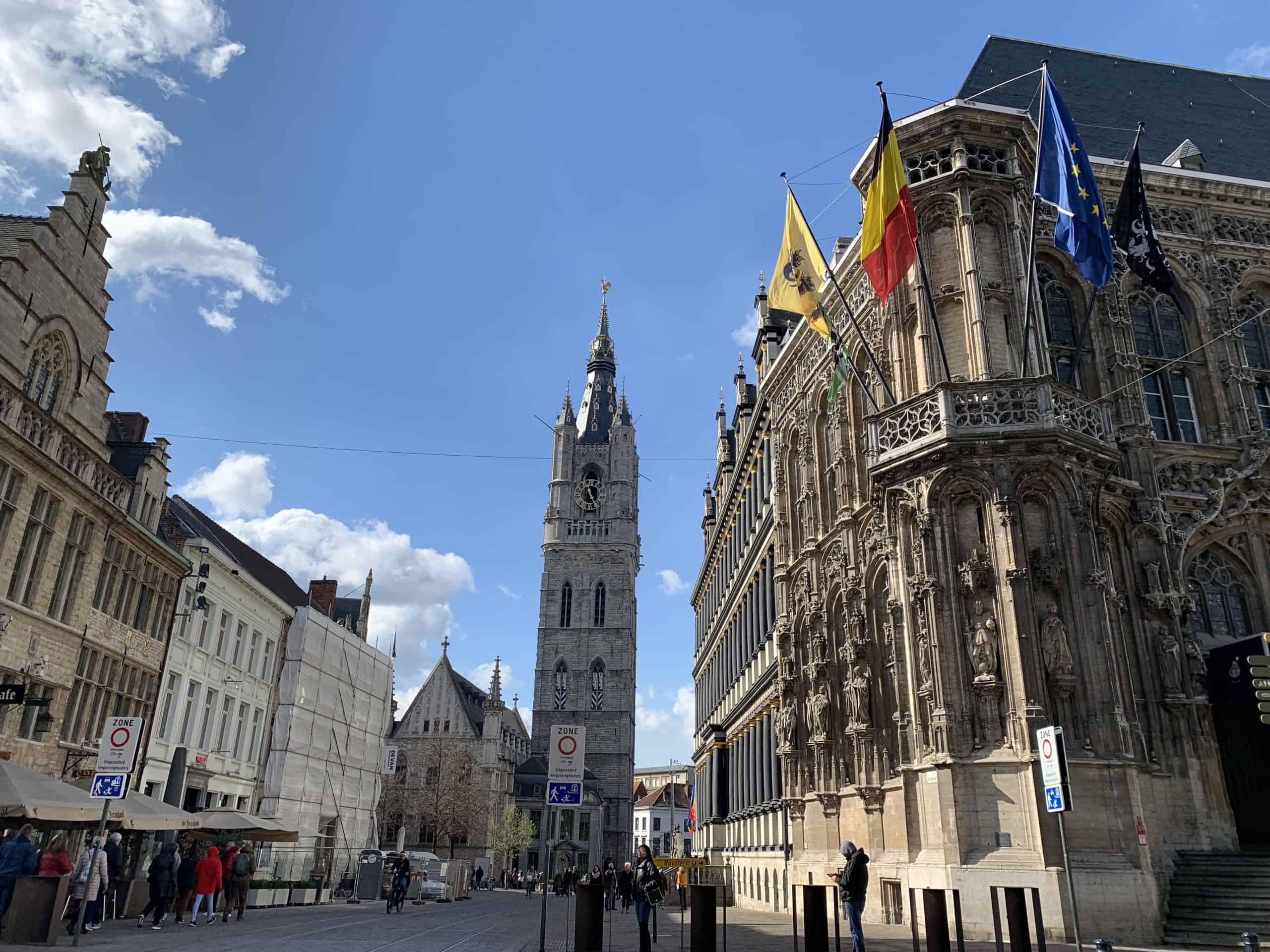 Ghent, birthplace of Charles V, is the capital of East Flanders and lies in the convergence of the rivers Lys and Scheldt. An important port city, its historic center remained intact during both World Wars.

In the old town of Ghent, you will find: the Beffroi, the Cathedral of St. Bavo, the Gravensteen, the Church of St. Nicholas, the Town Hall and the Bridge of St. Michael.

Symbol of Flemish civic power and independence of the city, the Beffroi of Ghent is one of the three bell towers that dominate the old town: the other two are the tower of St. Bavo’s Cathedral and that of the Church of St. Nicholas. Built in 1313, the works were completed in 1380 and it was used thanks to its 95 meters in height as a watchtower. Inside is housed the Bell Tower Museum with some statues used in the past as the ancient dragon-shaped windbreaker.

The Beffroi was included in 1999 in the World Heritage Sites by UNESCO.

Behind the Beffroi is the Cathedral of St. Bavo which, with its bell tower is visible from every corner of the historic center of Ghent. It was built in 942 but the Cathedral took on its current appearance only in the sixteenth century. Initially it was a chapel dedicated to St. John the Baptist; then it was transformed into a Romanesque church whose traces are visible in the crypt and finally, in 1559 it became a Cathedral dedicated to the Belgian Christian monk San Bavone.

The Gravensteen (Castle of the Counts of Flanders) was originally a wooden fortress erected in the tenth century at the point where the two rivers converge: Lys and Scheldt. In the eleventh century the wood was replaced with Tournai limestone while in the twelfth century the moat was built. The castle for a time was also the seat of the Council of Flanders and the Council of Oudburg, also performing the function of a prison.

In the heart of the old town is the Gothic-style Ghent Town Hall. Seat of the municipality, it can only be accessed with an organized tour.

A few steps from the Town Hall are the Werregarenstraat: pedestrian street that connects Hoogpoort to Onderstraat has become a tourist attraction thanks to street art artists

The Cathedral of St. Nicholas is dedicated to St. Nicholas, protector of sailors, bakers, merchants and its construction dates back to 1200. Built in the Korenmarkt (grain market) area, it is the oldest church in Ghent.

The main bridges in Ghent are the Grasbrug and St. Michael’s Bridge. At the center of the two was the ancient port of docking that played a crucial role in the commercial exchanges of the city. Along the river are the ancient residences of the powerful local guilds that date back to the period from the twelfth to the seventeenth century.