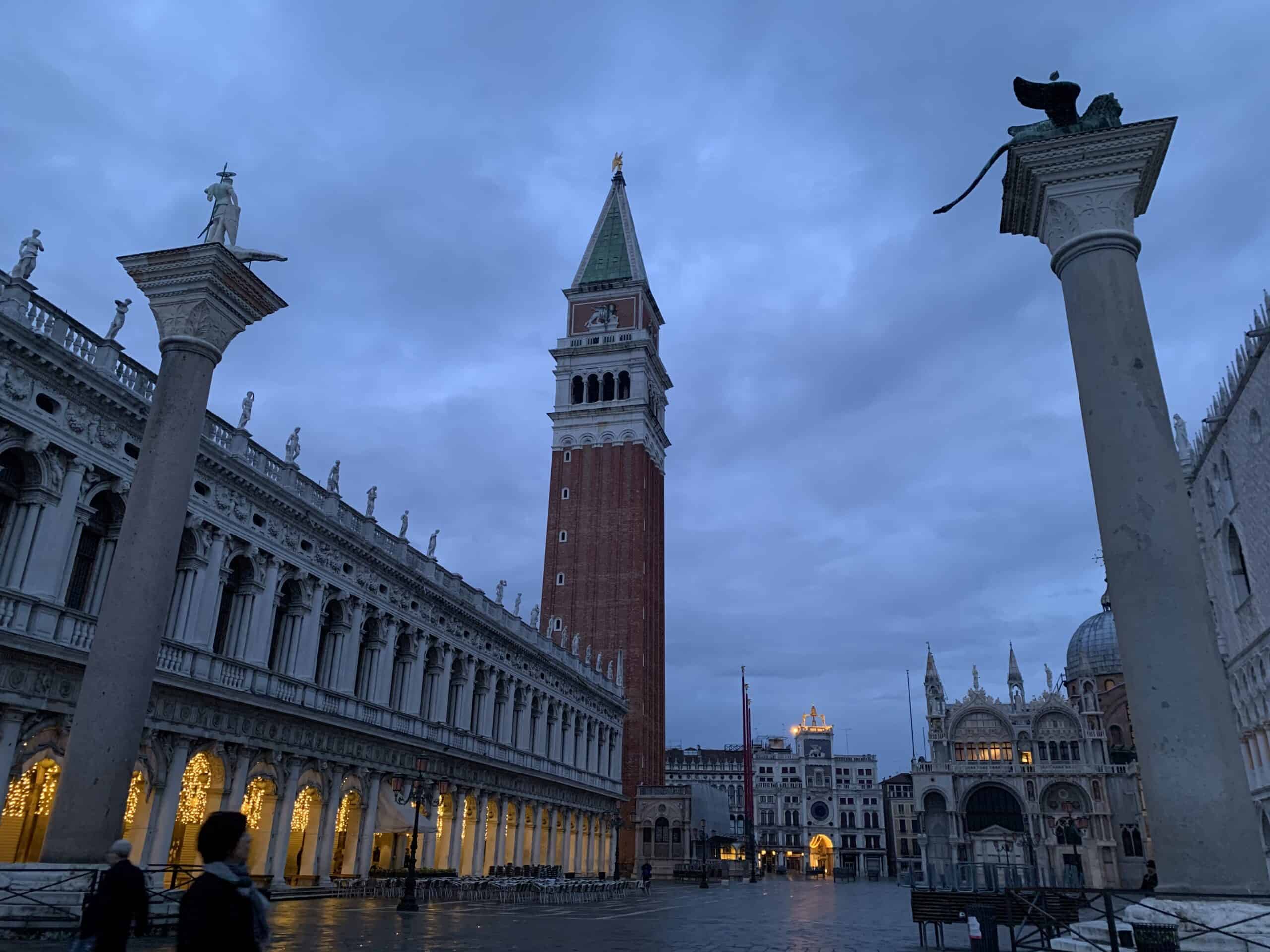 The Cathedral of San Marco, with its superb facade that reflects the multiculturalism of the Venetian city: the mosaics, the inflected arch of the Arab tradition, the lunette of theRomanesque era give an idea of how much this structure carries with it an almost millenary, representative as few of the evolution of the Serenissima.

The construction of the Basilica began in year 828 to house the remains of San Marco, once kept in Alexandria in Egypt but stolen by two Venetian merchants. The current Cathedral, with a Latin cross plan and five domes, became the city’s Cathedral in 1807. It has more than 4,000 square meters of mosaics, some from the 13th century, and 500columns from the 3rd century.

In addition to the Basilica in Piazza San Marco there is also the San Marco bell tower,one of the most famous in the world.

“El paròn de casa”, as it is called by the Venetians, has a square plan and is about 99 meters high if we also include the crowning cusp, formerly used as a lighthouse by sailors who docked in the lagoon city.

The structure, essential in its forms and majestic in its dimensions, proved solid over the centuries, until July 14, 1902 when the Campanile of San Marco suddenly collapsed. The news soon went around the world and the Municipality decided for the immediatereconstruction, completely identical to the one before the collapse: the works began on 25April 1903, and finished 9 years later in 1912, to be inaugurated in St. Mark’s day.

Another undisputed symbol of the square and of the city is certainly the Doge’s Palace, the centuries-old seat of the Doges who followed one another at the helm of the Republic of Venice, while with the annexation of Venice to the Kingdom of Italy the palace wasconverted into a museum: the famous Opera Museum.

To the side of the Doge’s Palace are the two monolithic columns. These were the gateway from the sea when the San Marco basin was the arrival point of merchant ships full of all sorts of goods. The columns represent the two saints of Venice: St. Mark the Evangelist in the form of a winged lion to symbolize the Serenissima and San Todaro (first patron saint of Venice, is represented with a long spear, a large shield and a dragon on his feet)to protect of the city.

The origin of the two columns is much discussed but it is believed that they were brought from Constantinople towards the second half of the 12th century.

Also in Piazza San Marco is the famous Clock Tower which, in addition to indicate the hours and minutes, also presents the moon phases and zodiac signs on its dial. In addition to the marvelous construction, and the two “mori” placed on either side of the bell (“Torre dei Mori”, another of the names by which the tower is known), the clockitself is the main attraction of the Tower.